Gustav Wied was born in Branderslev near Nakskov as the fifth of eleven children by Carl August Wied and Catha Wied.

He is generally known as a satirical critic of society in his time and he deliberately used his writing talents to expose the establishment, bourgeoisie and ruling class. The government had him imprisoned for 14 days in 1882 for a short story published in a newspaper. Wied wrote novels, short stories, poems and plays (including several satyr plays).

His best-known work is the novel Livsens Ondskab (1899), depicting life in a small provincial Danish town. The story revolves around customs official Knagsted, a red-bearded satyrical Diogenes, who openly ridicules the hypocrisy of the snobbish bourgeois inhabitants, and Emanual Thomsen, a tragic struggler, trying to obtain the funds needed to regain his ancestral farm. In the sequel Knagsted (1902), Wied let Knagsted comment on the contemporary fashionable society in the Bohemian spa resort of Karlsbad (Karlovy Vary).

Wied eventually lost popularity and fell ill, suffering from severe stomach aches. Badly affected by his condition and despondent, he committed suicide with an overdose of potassium cyanide in 1914.

The Gustav Wied Society was established in 1938 with the purpose of publicizing knowledge about Gustav Wied and his literary legacy. 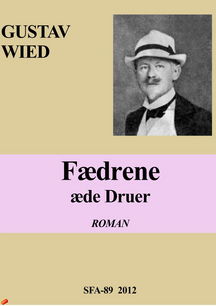